When you think ‘Parliament’, do you think art? You may be surprised to know that as well as being the home of laws and democracy in NSW, our Parliament House is a unique place to see fantastic and ever-changing displays of art, creative installations and exhibitions.

With something new on display every month, it all takes place in the building’s central Fountain Court, just beyond the front entrance.

If you find yourself travelling to the city you can make a day of it, with Parliament also offering free tours of the chambers, plus high tea and fine dining in the Strangers’ Restaurant, or casual sandwiches and drinks in the Public Café.

Not heading to Sydney any time soon? Current and past exhibitions can now also be explored virtually on the Parliament’s website.

Launched at the start of National Reconciliation Week, a new exhibition at NSW Parliament House is inviting visitors to connect with the lives and stories of Aboriginal people who lived in and around Sydney’s coast between the early 1800s and the 1930s.

On display until the end of July, This Is Where They Travelled follows the journeys of 10 Aboriginal men and women – including how their lives changed as Sydney grew as a city and, perhaps surprisingly, how much they remained the same.

Learn more about the exhibition here and see it for yourself any weekday between 9am and 5pm at Parliament House, 6 Macquarie Street, Sydney. 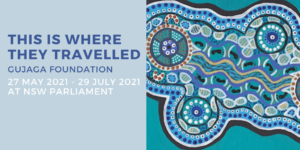 Clear Away the Dust is a vibrant and texture-filled new art exhibition on display in the Fountain Court of NSW Parliament House. It features the work of Hornsby-based artist Carmonn French, who grew up in a small town near the Murrumbidgee River and who puts the contrast between city and country NSW at the centre of her work.

“I was really surprised to learn that inside its historic walls, our parliament hosts modern and interesting exhibitions that anyone can come in to see – and I’m so excited to now be part of the program,” Carmonn said of exhibiting.

Clear Away the Dust is on display until 1 July at Parliament House, 6 Macquarie Street, Sydney. If you can’t make it during opening hours – weekdays from 9am to 5pm – you can check out the virtual exhibition here. 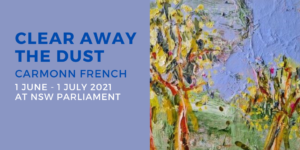